"I realized that as long as I allow my family connections to get me jobs, and open doors, no one will believe I deserve to be where I am. That I ever earned anything. I won't be my own person until I have the courage to stop being who my family wants me to be. Thank you for challenging me, in so many ways, but mostly to be a more independent thinker and to define myself by my own terms."
—Excerpt of Rebecca's goodbye letter to Callie

Willful Blindness[1] is the ninth episode of Season 1 of Good Trouble.

While Gael is busy prepping for his upcoming art show, Callie is on edge about how much Rebecca knows of her living situation. Meanwhile, Callie urges Rebecca and Judge Wilson to take action to protect a young female clerk working for a judge with a history of harassment. Alice is roped into planning a wedding shower for Sumi.[2]

Good Trouble Season 1, Episode 9 Promo Will Alice Come Out To Her Parents? 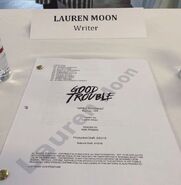