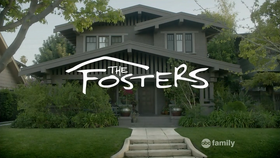 The Fosters is an American drama series that aired on Freeform (previously known as ABC Family). The series premiered on June 3, 2013, and ended on June 6, 2018, after five seasons and 104 episodes.

Prior to the series finale, Freeform ordered a spin-off of the series, Good Trouble, that follows Mariana and Callie as they embark on their adult lives in Los Angeles.

"The Fosters" follows the lives of the Adams Foster family, composed of a lesbian couple who are raising their children together. The show is set in the 21st century in San Diego, California.

Stef Foster and Lena Adams are the Fosters, an interracial lesbian couple who are partners and living in the Mission Bay area of San Diego, raising Stef's biological son, Brandon Foster, along with their adopted twins Jesus and Mariana. Stef is a police officer, while Lena is a school principal. Lena decides to take in Callie, a "troubled" teen girl with an abusive past whose ways will turn the family lives upside down. Subsequently to the family, will be added, Callie's youngest maternal half-brother Jude. In the end, the two women will legally marry, and the two siblings will definitively be adopted, adding them, to the already big family: Adams Foster.