The Coterie at The Palace, commonly referred to as The Coterie, is a communal living building in downtown Los Angeles. The Coterie inhabits the upper floor of The Palace Theater and extends to the rooftop.

In DTLA, Callie and Mariana move into the complex and meet Alice, the manager of the apartment complex. Their room is empty and worn down, and due to their furniture being stolen, the sisters had to lay their mattresses on the floor. Alice explained to them that everyone shares at The Coterie, from a bathroom to a kitchen. In the end, everyone donated pieces of their furniture to help Callie and Mariana so they had things.

In Twenty-Fine, Malika hosts her twenty-fifth birthday celebration at The Coterie. She invites a number of her friends to a communal dinner, and afterward, each Coterie member performs. When the majority of guests leave, the main group and their guests head to the rooftop pool area. Callie and Mariana fight and land in the pool, and soon, each of the guests do as well.

In Disruptions, Alice takes a call from a plumber about The Coterie.

Callie, after learning of The Coterie women's group chat bashing her, coupled with a fight with Gael and Mariana, decides to move out of The Coterie. She leaves Mariana note saying that she'll pay her half of the rent until the lease is up or Mariana finds a new roommate.

In Daylight, new tenant Isabella moves in with Mariana.

In Help, Rachel Boyle stays with Callie and Mariana for a few nights. Kelly expresses annoyance over Rachel for using all the hot water and playing show tunes. When Mariana sneaks out of The Coterie at night, a worried Rachel inspects every bathroom stall and even knocks on everyone's doors to ask if they've seen her. Mariana is able to find other living arrangements for Rachel.

In New Moon, The Coterie group attends a new moon ceremony with Malika Williams as their host. The event takes place on the rooftop and in the pool. However, the rest of the group is distracted by the wild raccoons that run rampid through the halls of the building. They initially mistake the creature for a werewolf or large rat, but are stunned to discover the raccoons. Malika, Isaac, and Dyonte, also find a raccoon in the pool swimming toward them. Once the creatures are trapped, Kelly reveals that she's watching the raccoons for a traveling animal show. The other Coterie members get rid of animal control for Kelly, who promises to keep a closer eye on the creatures.

In Shame, Isabella officially moves into The Coterie, taking Gael's rooftop loft at his request. He decides to stay with Dennis while Isabella gets settled. He tells the rest of The Coterie residents about Isabella's pregnancy and why she's really staying in his loft. 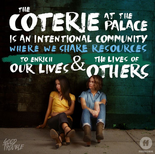