The Coterie at The Palace, commonly referred to as The Coterie, is a communal living building in downtown Los Angeles. The Coterie inhabits the upper floor of The Palace Theater and extends to the rooftop.

In DTLA, Callie and Mariana move into the complex and meet Alice, the manager of the apartment complex. Their room is empty and worn down, and due to their furniture being stolen, the sisters had to lay their mattresses on the floor. Alice explained to them that everyone shares at The Coterie, from a bathroom to a kitchen. In the end, everyone donated pieces of their furniture to help Callie and Mariana so they had things.

In Twenty-Fine, Malika hosts her twenty-fifth birthday celebration at The Coterie. She invites a number of her friends to a communal dinner, and afterward, each Coterie member performs. When the majority of guests leave, the main group and their guests head to the rooftop pool area. Callie and Mariana fight and land in the pool, and soon, each of the guests do as well.

In Disruptions, Alice takes a call from a plumber about The Coterie.

Callie, after learning of The Coterie women's group chat bashing her, coupled with a fight with Gael and Mariana, decides to move out of The Coterie. She leaves Mariana note saying that she'll pay her half of the rent until the lease is up or Mariana finds a new roommate.

In Daylight, new tenant Isabella moves in with Mariana.

In Help, Rachel Boyle stays with Callie and Mariana for a few nights. Kelly expresses annoyance over Rachel for using all the hot water and playing show tunes. When Mariana sneaks out of The Coterie at night, a worried Rachel inspects every bathroom stall and even knocks on everyone's doors to ask if they've seen her. Mariana is able to find other living arrangements for Rachel.

In New Moon, The Coterie group attends a new moon ceremony with Malika Williams as their host. The event takes place on the rooftop and in the pool. However, the rest of the group is distracted by the wild raccoons that run rampid through the halls of the building. They initially mistake the creature for a werewolf or large rat, but are stunned to discover the raccoons. Malika, Isaac, and Dyonte, also find a raccoon in the pool swimming toward them. Once the creatures are trapped, Kelly reveals that she's watching the raccoons for a traveling animal show. The other Coterie members get rid of animal control for Kelly, who promises to keep a closer eye on the creatures.

In Shame, Isabella Tavez officially moves into The Coterie, taking Gael's rooftop loft at his request. He decides to stay with Dennis while Isabella gets settled. He tells the rest of The Coterie residents about Isabella's pregnancy and why she's really staying in his loft.

In "Turn and Face the Strange", Alice is traveling for a comedy show opening for Margaret Cho, and leaves Sumi as interim manager until she can return. Sumi decides to rent out the upstairs loft, with Gael showing interest in renting it for Isabella. However, he doesn't get back to her in time so she rents it out. Instead, Gael sublets Alice's loft to Isabella, as newcomer Joaquin Peréz moves into The Coterie.

In "Kiss Me and Smile For Me", Callie and Mariana's moms and brother Jude come to visit, rallying The Coterie together. During a family dinner, Callie announces that she is moving to Washington D.C. to pursue her dream job with the ACLU. The event becomes an impromptu going away party. As Callie prepares to leave The Coterie, and her sister behind, Joaquin ups his investigation into The Coterie and its residents. His sister Jenna had once sent a post card from The Coterie before her sudden disappearance, and he hopes to uncover the truth about what happened to her.

In "Meet the New Boss", Joaquin enters Alice's loft to snoop through the file cabinet. He finds the Coterie leases. He finds his, Kelly's, Diana Graham's, but not Jenna's. Joaquin and Alice are talking in the kitchen when There’s a crash that she blames on raccoons. Turns out, the shelf collapsed in the other room, and books fell. She thinks it’s a ghost but he deals in facts, not imagination. He steals a book then says goodnight. Mariana finds one of Callie’s old legal books that she left behind. The book Joaquin stole was Jenna's former bible, and he finds a massage coupon addressed to Diana Graham inside. He's also temporarily bunking with Luca, a homeless young adult who is the center of his latest story.

In "It's Lonely Out in Space", Joaquin asks Kelly about Diana Graham but she doesn't know much about the woman. She shows Joaquin her favorite shower stall as it has the best water pressure in The Coterie. Later, Joaquin learns that Diana Graham was an alias used by his sister Jenna.

In "So This is What the Truth Feels Like", Joaquin offers his loft to Luca while he's out of town for a few days, only asking that Luca not let anyone know that he's staying in the loft. Luca obeys and keeps to himself, accepting a job fixing the broken shelves courtesy of Joaquin and Sumi. He later is found out by Davia and leaves The Coterie before anyone else can uncover the truth. 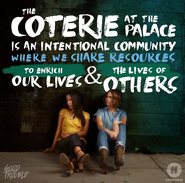