"Maybe next time open your mind to the whole person. You might make a real connection."
—Malika

Swipe Right[1][2] is the seventh episode of Season 1 of Good Trouble.

The episode was written by Ally Musika and directed by Troian Bellisario.

Mariana, Davia, Malika, and Alice set-up dates for each other using a popular dating app, to varying degrees of success. Meanwhile, Callie makes a big decision regarding her relationship with Gael. 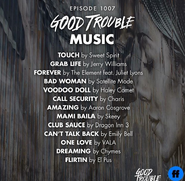 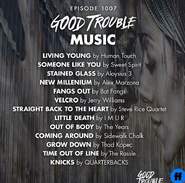