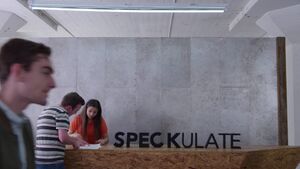 Speckulate is a technology startup company that works with programming and application development. It was founded by tech-genius Evan Speck.

The company was founded by tech-genius and entrepreneur, Evan Speck, in roughly 2014.

Speckulate celebrated its five-year anniversary in "Imposter" by throwing a costume party.

Mariana began her job as a software engineer for the company and was welcomed by her primarily male co-workers. She faced misogyny and sexism from within the company, especially when she opened a file titled "Assets" and discovered that it was filled with GIF images of women's breasts. Mariana was also told by the head of the HR department that CEO Evan Speck was a very busy man and would not want to speak with her on app ideas. She proposed her idea to him on her second day, and he reported her to HR where she received a scathing lecture in front of her colleagues. At the end of the third day, she fixed a coding error in Alex's work and replaced all the images in the "Assets" file with GIF images of bare male breasts and chests.

Mariana continued to face blatant sexism from her teammates. She then found a kindred spirit in Casey Pierce, the only female team leader at Speckulate. They became friends and Casey warned her to keep her head low for a while and pick her battles.

The company celebrated five-years since its initial launch. The blue team was assigned Evan Speck's "secret project" to work on. The project later turned out to be a new social media platform.

Angela Miller confided in Mariana about her being hired to fix the culture at Speckulate. She later found out that it was false, and was subjected to many hardships that she later inflicted upon Mariana. As a single mother, Angela was in too much of a vulnerable position to speak up and risk being fired. The reason she gave Mariana the information on the salaries was to help her change the culture that she, herself, couldn't.

The Byte Club released their spreadsheet addressing the pay gap between men and women - and also between white employees and employees of color. This caused turmoil at the company, and a meeting was called to address the issue. Josh demanded to know who was responsible for the leakage, as it was a PR nightmare. Claire asked why they don't raise the women's salaries to match that of the men since that would solve the issue. Josh claimed that he was unaware of the issue before the spreadsheet released. He elaborated that Angela should have made him aware or corrected it herself. Because of her lack of duty, he started to publicly fire her when Mariana stood from her chair and took the blame. One by one, each key member of The Byte Club, along with Raj Patil, stood and shared the blame. This made it impossible for Josh to place the blame on one person. He subsequently said they were all fired, but Angela countered by saying that would create an even larger PR issue. Flustered, Josh looked over his mused employees just as Evan Speck entered the room and demanded to know what was happening. Claire then announced that since they were clearing the air, Josh had tried to kiss her. Rachel seconded that, and when asked how many people Josh has tried to kiss, several other women raised their hands as well. Josh claimed the women were running a smear campaign against him and that he was the victim.

Later that day, Evan told Mariana that he was working to fix the pay gap issue and also planned to fire Josh.

Following the anonymous manifesto that blasted the women at Speckulate and Evan's involvement with them, the women demanded action be taken. Evan explained to Mariana that he can't involve himself in the manifesto drama as the board is looking for good PR not bad. Mariana suggested an internal statement condemning the manifesto, but Evan didn't see the point in acknowledging it at all. He knows the value of the women at Speckulate and Mariana relays the point to her fellow engineers.