Good Trouble Wiki
Register
Don't have an account?
Sign In
Advertisement
in: Characters in The Fosters season 1, 1A, 1B,
and 15 more

Sharon Elkin is a recurring character on The Fosters. She is the mother of Stef Adams Foster and the ex-wife of Frank Cooper, and has a husband, Will. Sharon was one of the people to help at Stef and Lena's wedding along with Lena's mother, Dana. She returned afterward to attend Frank's funeral. She makes her first appearance in I Do.

Sharon is portrayed by Annie Potts.

Sharon has short strawberry blonde hair with brown eyes. She is shorter than her ex-husband, Frank, her daughter, Stef, and her husband, Will. In the later seasons, she cuts her hair shorter and dyes it grey.

During Stef and Lena's wedding, Sharon seems very impatient, but also is accepting and a bit jumpy at times. She also wants what's best for her and her family. She is accepting of her daughter's sexual orientation and is always supportive of her. Her progressive state of mind seems to change and evolve throughout the series, as she becomes more accepting of sexual orientations and abortions. When Sharon found about Emma's abortion her first instinct was to make sure the girl was okay. Despite this, Sharon can also be quite abrasive and talks about sexual notions around others, which don't seem to bother her. Sharon has a great sense of humor and is noted to be the comic relief in the episodes she's in.

She volunteers to help Stef and Lena with the wedding, and ends up fighting with Lena's mother, Dana, over the floral arrangements. She also tries to push her ex-husband, Frank Cooper, into attending Stef and Lena's wedding.

Sharon and Stef talk about her and Lena adopting Callie and Jude.

Sharon comes to Frank's funeral along with some other family members.

Sharon visits The Fosters for Christmas as Stef soon learns that all the money from her father went to Sharon. Stef begins complaining about it over and over until dinner, which there is a huge fight until Sharon reveals she bought the kids college funds and was leaving it a surprise for Christmas morning.

Sharon is at the house and was constantly taking morning walks. One afternoon, Stef follows Sharon and sees her enter an RV and Sharon tells her it's her new boyfriend, Will. They begin fighting about Stef seeing the doctor for another checkup but Sharon send the documents to a different doctor anyways and the doctor later calls to make an appointment.

Sharon and Will announce to the Fosters that they're about to get married. After Sharon and Stef have a talk alone, Sharon tells her to not give Will her blessing because she was backing out of the wedding. She tells Stef that she will break up with Will in the morning, but doesn't do it then. Sharon then says she will do it after dinner, but when Will sweet talks her, Sharon wants to proceed with the wedding. When putting on her wedding dress, Sharon talks to Emma about reading her letter to Jesus but not telling him about the abortion and hugs her. She then hides out in the bathroom and tells Stef that she feels she is betraying her ex-husband, Frank. Will has a talk with Sharon, and they both walk down the aisle, and right behind them were Lena and Stef, and the women were getting married for the second time.

Jesus calls Sharon and asks her if she read all of Emma's letter to him, and she tells him the truth.

Giving Up the Ghost

Lena suggests that she and Stef should go to the couples retreat Sharon bought for them, but Stef didn't want to go and that she would call her mom to cancel it. Later, Stef decides she and Lena should go.

Frank is Sharon's ex-husband. They have divorced for unknown reasons.

Will is Sharon's husband. Sharon met him at his RV sometime before First Impressions, and was seen getting married in The Long Haul. Will is very caring towards Sharon and says she is the woman he loves most in the world.

"Sharon: Well, I hope the judge throws the book at that Vito kid.
Brandon: Vico.
Sharon: Vico? What kind of made up name is that?

"I just want to tell you that I... I support your choice. Do your parents know?"
—Sharon to Emma

"I'm sure you did. But I can understand why you couldn't. You don't have to worry about me, okay? I mean I wasn't even supposed to see it so... I would never tell anyone. I just needed to know that you were okay."
—Sharon to Emma about her abortion 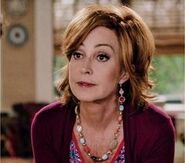 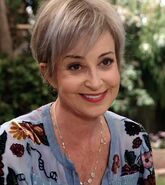