Good Trouble Wiki
Register
Don't have an account?
Sign In
Advertisement
in: Seasons, Season 3, 3A,
and 4 more

Now in its third season, the critically acclaimed drama “The Fosters” picks up during summer, a few weeks after the cliffhanger finale left off, as the family deals with the aftermath of the terrible car accident involving Mariana, Jesus, and their pregnant biological mother Ana. Now that Callie is back at the Adams Foster's home, she is feeling secure for the first time in a long time and determined to have a summer of free-spirited fun, including trying her best to get over Brandon. Meanwhile, Brandon is going to Idyllwild Music Program, where he will be faced with serious competition. Jude and Connor continue to develop their relationship and what it means to be a young teen exploring new love. Stef and Lena continue to face challenges as a couple and as parents yet are determined to fight through them together.

Add characters here when they have appeared in at least 5 episodes in the season. 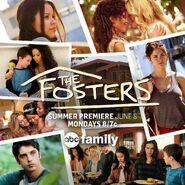