Willful Blindness
Rebecca is the daughter of Diana and the granddaughter of a U.S. senator. She is lawyer who is currently working alongside the Lassiter Group in Denver, Colorado.

Rebecca worked for federal Judge Curtis Wilson while studying for the bar exam. During this time, she was colleagues with Callie Adams Foster and Benjamin.

She is portrayed by Molly McCook.

Rebecca was born and raised in Texas. Her grandfather is a Republican U.S. Senator, and the majority of her family is involved in politics, often referred to as a political dynasty. Rebecca was born with a trust fund that secured her future. While her family had money, she had to work for everything that she has.

After graduating high school, Rebecca attended Yale University and earned her law degree, before clerking for Judge Handelman. It was while working for Handleman that she experienced sexual harassment. What started off as perceived innocent nicknames and comments escalated to touching, brushing against her, and other inappropriate behaviors.

Rebecca told her family about Handelman's actions, and her grandfather pulled strings and secured her an interview with Judge Curtis Wilson. She was hired to clerk for him, though her colleague Benjamin often mocked her for being "handed" the job and growing up with "a silver spoon".

Rebecca is tall and slender, with chin-length blonde hair and green eyes. She is always seen in professional clothing such as suits and carrying a briefcase.

At first, Rebecca is cold and distant to her fellow clerks and hyper-focused on her work. She is firm in her conservative beliefs and never backs down from an argument especially when she thinks she's right. She has a reputation of having everything handed to her from her Grandfather and never having to work for anything. This is a reputation that she doesn't entertain and instead, lets her work speak for itself. She is friendly enough, however, she is hyper-driven to be perfect in order to live up to her family's expectations.

As she grows closer to Callie and allows herself to be vulnerable her kind yet strong side begins to show. At first, she didn't want to come forward about her sexual harassment for fear of how her family would react but later decided to file a complaint against Judge Handelman. Before she leaves for Denver, she leaves Callie a touching goodbye letter explaining her reasons for leaving. Included is her desire to separate herself from her families legacy and begin carving her own path and making her own decisions. She also, surprisingly enough, promises to keep Callie's secret.

"Callie. I'm sorry for leaving without saying goodbye, but you know I'm not exactly the sentimental type. I'm making an exception with this note, but don't worry, I'll keep it short. You were right. Kate doesn't have a grandfather who can get her a clerkship with another judge. But before you get too proud of yourself, that's... Not the only reason I filed a complaint. I realized that as long as I allow my family connection to get me jobs, and open doors, no one will believe I deserve to be where I am. That I ever earned anything. I won't be my own person until I have the courage to stop being who my family wants me to be. I never thought I'd say this but... Thank you for challenging me, in so many ways, but mostly to be a more independent thinker and to define myself by my own terms. I still disagree with you on your liberal politics, but I admire your conviction and your ethics. Which is why your secret is safe with me. I know you won't cross the line of what's appropriate, in spite of your intimate living situation. Tell Ben goodbye and to go to Hell for me. And if you're ever in Denver, let's have a drink. Yours truly, Rebecca."
—Rebecca's goodbye letter to Callie 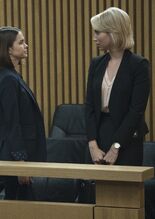 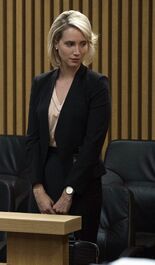 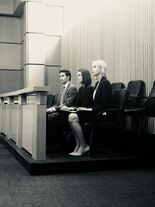 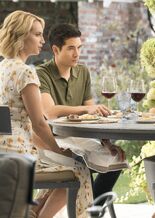 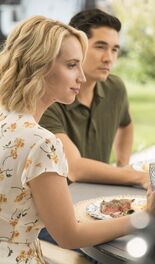 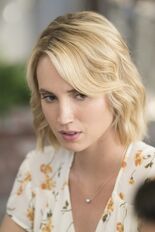