Raj was born to an Indian family in or around 1998. In high school, he enjoyed skateboarding and had an innate desire to fit in with his fellow skater friends - who were primarily white men. Because of this, Raj dyed the tips of his dark brown hair platinum blonde, but later regretted it and reverted to his natural coloring. After high school, he attended college and received his software engineering degree. He was soon hired to work at Speckulate, and became a member of Team Blue under Alex Wood's supervision.

Initially, Raj comes across as just another sexist man at Speckulate. However, his attentive nature sets him apart, and he cares about how Mariana feels at their workplace and apologizes for the behavior of his colleagues. His desperate desire to fit in is his biggest flaw. He is extremely intelligent and bright-minded, able to create complex code when his bosses tell him too. At the end of the day, Raj ended up standing up for Mariana and reporting Alex's sexist and discriminatory behavior to HR. He also agreed to take part in the byte club's spreadsheet to close the pay gap.

Raj is an attractive man in his mid-twenties with thick brown hair, light brown eyes, and a casual clothing style.

He welcomed Mariana to Speckulate and observes her interactions with Alex and the rest of the team. Unlike Alex, he doesn't seem to negate her abilities or question her intentions. He also doesn't chime in when the assets folder is being discussed. 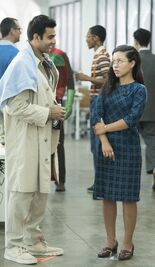