Patrisse Cullors
Patrisse Cullors is a writer for Season 2 of Good Trouble. Patrisse was initially brought onto the series as a story consultant during Season 1 but was promoted to a writer.[1] She left the writers room in the Summer of 2020, and became the international director of Black Lives Matter.[2] She also portrayed a version of herself in Seasons two and three.

She is also an advocate for prison abolition in Los Angeles and a co-founder of the Black Lives Matter movement.

In Arraignment Day, Patrisse appears alongside the Black Lives Matter activists who are protesting the arrest of Malika Williams, who is being detained for unknowingly breaking a restraining order while protesting. Due to Malika's connections to BLM, the Judge on her case set her bail to $250,000. The BLM activists visit the courthouse for a sit-in to raise money for Malika's bail while simultaneously trying to access DA Hansen with a petition to drop Malika's charges. Patrisse emerges to tell everyone that they have raised the bail money but aren’t going to leave until DA Hanson comes out and they convince her to drop all the charges. Together, they chant “shut it down”. She is also present that evening at The Coterie when Malika is released from prison. She happily relates that Malika's charges were dropped, as the impact of Gael and Dyonte's ad was enough to sway DA Hanson. 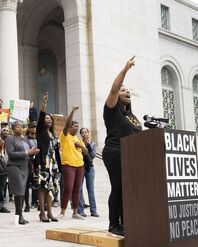 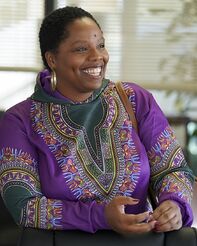 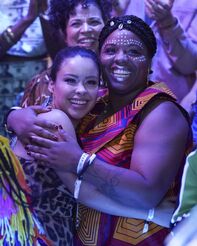