This article is a stub. You can help Good Trouble Wiki by expanding it.

River Butcher
Lindsay Brady is a recurring character in Season 2 of Good Trouble and is portrayed by River Butcher.

Lindsay is a professional comedian who is impressed by Alice Kwan's comedic skills, opting to mentor the woman, though Lindsay's constant negative comments and comedic material theft quickly turned them into competitors.

Lindsay is a smug comedian with little regard to how their jokes affect others, They were threatened by Alice's comedic skills which prompted them to being a mentor-mentee relationship. Lindsay had little regard for Alice's relationship with Joey Riverton, their ex-partner, and Joey later admitted that Lindsay cheated on them. Lindsay is a manipulative person who wants to succeed at any cost, even if it means stealing comedic material or using someone else's story to their advantage.

Lindsay has short brown hair, brown eyes, and a moderate stature. They usually dress in relaxed clothing such as a plain t-shirt, jeans, and the occasional flannel over shirt.

In Arraignment Day, Lindsay and Alice face-off in the Coterie bathroom when Kelly emerges fully-clothed from the shower. Alice calls dibs on the use of the material, which Lindsay objects to. They go back and forth with their comedic interpretations of the event until Sumi enters with a funnier joke. Alice asks Sumi for her opinion on who owns the joke, but Sumi refuses to get involved. She won’t come between her friend and her significant other.

In a flashback to earlier that week, Alice told Lindsay that she won’t let her life or jokes be appropriated by Lindsay or Sumi, finally telling them that she’s had enough and will do her version of The Coterie jokes and storms off. Lindsay watches her in disbelief.

Alice takes a call from Ruby who tells her that Sumi sent her a link to the live stream performance, and the judges unanimously agreed to accept Alice into the CBTV Comedy Diversity Workshop. Everyone is happy for her, though Lindsay and Sumi enter with Alice thanking Sumi for her help. Lindsay was also accepted into the program.

In Whoosh, Pow, Bang, Alice’s comedy group opens with the members introducing themselves; Derek, Magda, Sanjana, Stacey, Shaun, and Lindsay, all of whom are deeply successful in their respective fields. Alice is the exception to the six-person program, in which everyone realizes she isn’t as successful as the others. The program director makes it clear he is responsible for making or breaking their careers, as the program has made many careers. He rambles about diversity but goes on to stereotype everyone based on their race or identities, including Lindsay, saying they could be the next SNL character based on their non-binary appearance.

Once the class is dismissed everyone talks about how bad Scott is, with the group confronting Lindsay on Alice’s deal. Lindsay claims she gave Alice her first big break but she’s a total newbie, with everyone agreeing and betting that she will go home first. Alice listens from behind the curtain. Back at The Coterie, Alice brushes her teeth when Lindsay comes in prompting Alice to admit she is doubting her comedic skills after overhearing the CBTV group bad mouth her. Lindsay suggests not giving up just because she had a bad day. They didn’t want Alice to quit, they just didn’t want to compete with her to get into the program. Lindsay leaves so Alice tries to figure out a character for the program.

The CBTV group watches the skits that unfold, with Scott choosing Lindsay and Alice for the next skit. Lindsay opts for a country person selling fly-fish bait, while Alice draws inspiration from her mother, remembering a conversation with Trea the previous night. Trea is selling makeup to get a divorce since her husband chews loud, leaves glasses of water everywhere, and more. Alice does amazing with her skit, outshining even Lindsay or struggles to combat Alice's physical comedy and comedic timing. They clap for Alice but are visibly annoyed. In the audience, Derek remarks that Alice stole the scene from Lindsay so everyone is on the chopping block now. They go to leave when Alice stops them, praising their country's fly-fishing skit. Lindsay notes that the writers don’t think so but she’s lucky as she has her ethnicity to "fall back on". 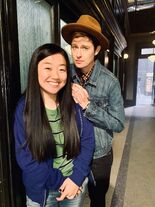 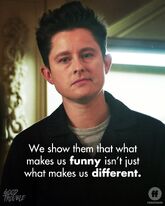