Josh was born in Santa Monica, California to a real estate agent and an elementary school teacher. He attended Dartmouth College in Hanover, New Hampshire, where he became a member of the Psi Upsilon fraternity. He moved to Los Angeles in 2007 and stayed to pursue his acting career. 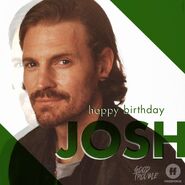