Turn and Face the Strange

Isaac Hall is a recurring character in the FreeForm series, "Good Trouble". He is portrayed by Sarunas J. Jackson.

Isaac is a former professional basketball player that Malika noticed on Shipper. He didn't match with her, but later that night walked into the bar she works, Douro. The two had instant chemistry and played off each other the entire night. They eventually began a romantic relationship.

At some point in his life, Isaac played professional basketball. When asked about it, he was vague and said he didn't play anymore.

Charming, charismatic, witty, and a little cocky, Isaac has a good heart and driven mind. He isn't afraid to go after what he wants and is an incredibly determined individual. He is intelligent and committed to his goals and passions, whether that be a person or company. Isaac struggles with anxiety and panic attacks, specifically when pressure is on him or when he is in group situations. Isaac's coping mechanism is noise-canceling headphones in an attempt to avoid the attack. Partially due to the stigma around male mental health, he hasn't received professional help for his anxiety. He mentioned he didn't want to appear weak in front of Malika, something that she assured him wasn't the case.

In Swipe Right, Davia shows Malika a picture of him on Shipper and Malika found him attractive. She swiped on him but didn't match with him which meant that he didn't swipe right on her.

That night, he and some of his friends entered the bar she was working at. She ignored him and was cold toward him. It wasn't until he politely confronted her about not being able to order a drink that she told him, "I overlooked you", which was a direct nod to him overlooking her on the app. He didn't remember her from the app and began flirting with her when she brought the drinks over. While they were bantering over movies, he claims that he prefers women like Kate Hudson over women like Jennifer Lopez, which insinuates that he likes white blonde women. This annoys Malika and she leaves him and his friends alone for a while.

She later confronts him about ignoring her and not matching with her, insinuating it was because she's African-American, while the rest of his matches were blonde Caucasians. He leaves the bar after paying his tab only to return later that night with a basketball and apologizes to her. He offers to play a game of basketball with her, in which the winner picks what happens. He bet that if he won't, they would go on a date, while she bet that if she won he'd leave her alone.

They played for a while until she called him out on holding back. He promptly removed his shirt and they continued playing until she called time to remove her shirt. After she presumably won, they retreated to the bar and made out before heading to the Coterie. At some point in the night, they had sex, and he stayed over at the Coterie. The next morning he met Davia, Alice, and Mariana. He then informs Malika that he would call her and then left the apartment complex.

In Capoeira, Malika and Isaac talk about her hearing tomorrow, but she isn’t worried since her BLM lawyer told her it was routine. Isaac is skeptical about the lawyer’s claim that the DA would back down if Malika didn’t take the deal, with her reminding him that was her decision. Malika insists that the reason she is in trouble is because of her actions, though he’s still worried. She refuses to let him cancel his business trip. They facetime that night, with her lying that she’s fine. She teases that they should get a bigger bed since he’s so tall, but he proposes the idea of getting a bigger place. She doesn’t want to talk about that over the phone so they exchange I love you's and end their call.

In Arraignment Day, Isaac tries to fly home from his business trip following Malika's arraignment hearing going poorly, as she's been remanded into custody until her $250,000 bail can be paid. Isaac calls Dom as he’s on his way, but this was what he was worried about in the first place. Isaac arrives that night, though Malika has already been released. He hugs her as they kiss, with him feeling bad for not being there sooner though she assures him that the only thing that matters is that he got here. They dance together that evening as they celebrate her release.

In "Turn and Face the Strange", with Isaac's surprise return, Malika tries to question his arrival, he admits to = wanting to get back with her. She can't do it right now as she needs time to think. The next evening, Malika meets Isaac at the basketball court. They talk about her new tattoo then play basketball together. They seem to have a lot of fun. He admits he just needed time to think. She admits it felt like goodbye and he points out that she lied about having feelings for Dyonte. She admits she was confused and is still learning things about herself. She's sorry for hurting him, so he apologizes for leaving but is back now to be with her. They admit to missing one another. She tells him that she's moved on with other relationships. She loves him and wants to be part of his life if he'll let her. 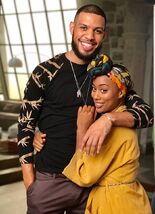 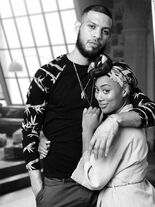