Good Trouble Wiki
Register
Don't have an account?
Sign In
Advertisement
in: Characters in The Fosters season 2, 2A, 2B,
and 7 more

Hayley Heinz is one of Mariana's former friends from her old dance group. She is portrayed by Caitlin Carver. She is also Jesus' ex-girlfriend.

Hayley is on the dance team and Mariana's former friend. She hooks up with Jesus in Play after the two find themselves in ended relationships. After this, the two become a couple. However, they have a mostly unstable relationship due to Hayley's clingy and over needy behavior.

Eventually, she crashes the Foster family camping trip by going to the group's camping site in order see Jesus. Finally seeing the negative influence she has on him and his family, Jesus breaks up with her, infuriating Hayley. She later steals Mariana's dystopian robot dance theme for their latest dance contest, much to Mariana's annoyance.

Hayley has long, glossy brown hair, a pale complexion, green eyes and a tall, slim figure. She is athletic and moves well from dance. She often wears girly clothes, with attention-grabbing accessories.

Although Hayley is polite, she is also a little bit manipulative and clingy. Her clingy and over neediness often result in the end of her relationships; both Jesus and her college ex-boyfriend dumped her because she was overly attached.

Hayley appears briefly for the first time during dance practice. She tells Mariana that she is doing great.

Hayley is seen talking to her friends from the dance club. Later, she is seen at the Fosters' house during the party. She drinks too much and Jesus finds her while she is crying. She explains that she just broke up with her boyfriend. They talk more and end up having sex. Jesus asks her for her phone number.

Hayley first appears at dance practice when Mariana asks her whether it was true that she saw Caitlin crying. Hayley admits that it's likely because she got kicked offed the team. During practice, she often glances over at Jesus and eventually asks Mariana if Jesus has talked about her at all, and admits that they hooked up at her party.

Later on, Hayley is shown at the Fosters' house, but it's to see Jesus. They end up kissing and she asks whether they can keep their relationship a secret for now — she doesn't want her ex finding out. They agree.

Afterwards, Mariana asks why she was put on the dance team, and Hayley informs her that part of the reason was due to her being Lena's, the almost-principals, daughter. Hayley states that it's a good thing because Mariana has improved and she is almost good enough to make the team, before she walks away.

Hayley meets up with Jesus when the Adams Fosters go on a camping trip. Later that day, she says she wanted to join Mariana's dance team, so Mariana told her about the Dystopian Future theme she had planned. Afterwards, Jesus breaks up with her.

The Silence She Keeps

Hayley walks next to Kaitlyn as she tells Mariana poaching dancers is not allowed. Kaitlyn also teases her about the Dystopian Future theme Mariana had planned, which Hayley told Kaitlyn about.

The End of the Beginning

After both undergoing a break up, they hook up at Mariana's party. He promises to call her and after a speech from Mariana sister, he does. They decide to keep their relationship a secret for the time being. However, they soon break up when Jesus grew tired of her over attachment to him and how bad of an influence she proved to have on his family. 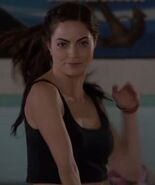