"He really needs to invest in some serious curtains."
—Callie

Happy Heckling is the fifth episode of Season 2 of Good Trouble. The episode aired on July 16, 2019.

Callie attends a networking mixer that causes her to confront some perceptions about herself. Mariana's close relationship with Evan sparks rumors at Speckulate offices. Meanwhile, Alice encounters one of her idols at a queer comedy club where she's attempting to get her standup career off the ground. 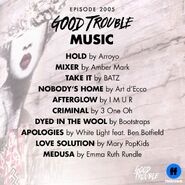