Good Trouble Wiki
Register
Don't have an account?
Sign In
Advertisement
in: Characters in The Fosters season 1, 1B, Characters,
and 5 more

Hayley Kiyoko
Gabi Ortiz is a recurring character on The Fosters and a main character on the web series spinoff, Girls United.

Gabi is portrayed by Hayley Kiyoko.

Gabi came from a broken home, where many of her family members were criminals. Her mother died when she was a baby while her father was a drug addict. At one point, Gabi's father roped her into doing drugs with him. She was one of the "bad kids" at school, often getting into trouble and fights. After committing home invasion, robbery, and cyberbullying, Gabi was arrested and put in Juvie. When she was released, she was placed into the all-girls group home, Girls United.

Gabi is an attractive girl with an edge. She has brown hair and is usually tied into a bun.

Us Against The World

Carmen mentions that Gabi is back in juvie and has seen Kiara working on the streets at El Cajon. 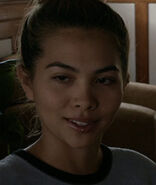