"Mariana. I decided to move in with Jamie. I'll cover my part of the rent for the rest of the lease, or... Until you find a new roommate. I'll get the rest of my stuff this weekend."
—Callie letter to Mariana

Disruptions is the eighth episode and Summer finale of Season 2 of Good Trouble. The episode aired on August 6, 2019.

Following multiple confrontations in her life, Callie decides to make a change. Gael learns something unexpected about Elijah from the group commissioning his new art project. Meanwhile, Mariana gets the real story about what happened with the female former engineer.[1] 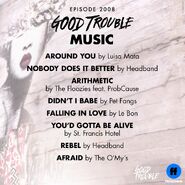 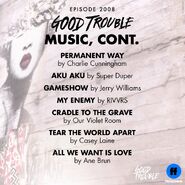