Good Trouble Wiki
Register
Don't have an account?
Sign In
Advertisement
in: Good Trouble, 2B (Good Trouble), Episodes,
and 2 more

"Them? You're the one who sent me to the principal's office, more than once. You're the reason I'm in this bullshit program."
—Andre to Davia

Daylight[2] is the thirteenth episode of Season 2 of Good Trouble. The episode aired on January 29, 2020.

Callie and Jamie’s relationship is tested when they are on opposite sides of a case. Mariana’s job is threatened, and she has to decide how far she’ll go to keep it. Malika has a new opportunity that could be jeopardized by her legal issues. Davia faces the unintended consequences of her behavior. Alice balances her friendships with Lindsay and Sumi. 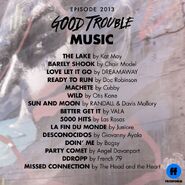