He portrays Brandon Foster in the Freeform series, The Fosters, and its spin-off, Good Trouble.

David Lambert was born in Baton Rouge, Louisiana. He was home-schooled. He has lived in England, Texas, and Taiwan but has been living in Georgia for many years. David has a younger brother. He can play the trumpet and is learning the electric guitar. He also has a very strong tenor singing voice. He has been doing theater for many years, beginning when he was cast in the play the Wizard of Oz at age 3. Theater performances include Mr. Tumnus in The Chronicles of Narnia: The Lion, the Witch, and the Wardrobe, Mr. Mayor in Seussical, Carisford in Little Princess, and Phao in The Jungle Book. He also played J.J. for one episode on Psych.

Lambert was discovered at an open casting call by agent Joy Pervis in Atlanta. After performing his monologue, he was asked to do something else. At first thought, he recited the Pledge of Allegiance, and it worked. He was in Georgia when he got the call to pack for Canada, where Aaron Stone was filmed.

Most recently, Lambert starred as Jason Landers, Charlie Landers/Aaron Stone's brother in Aaron Stone and Goose in the Disney Channel original movie Den Brother, also starring Hutch Dano. He will be on the TV show. Lambert also starred in the Hallmark Hall of Fame movie, "A Smile As Big As The Moon," which aired on January 29, 2012.

In 2013 he was cast as Brandon Foster, a musical prodigy, in the Jennifer Lopez produced series, The Fosters. In 2018, after the series wrapped after its fifth season, David signed on to be a guest star in The Fosters spin-off, Good Trouble. 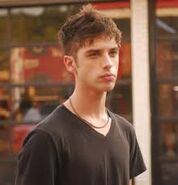