Davia Moss is a major character in the Freeform series, Good Trouble. She is portrayed by Emma Hunton.

Davia is an outspoken school teacher who lives at The Coterie. She is a body-positive social media influencer primarily on Instagram.

Davia Moss was born and raised in Fitchburg, Wisconsin, Davia was always a curvy girl. Her mother would often fat-shamed her and belittled her physical appearance which contributed to the mental and physical disorders she developed later in life. Davia was diagnosed with anorexia as a young teen, but received therapy for her issues and went into remission during an unknown period.

In high school, Davia met Jeff and was best friends with him, though she always had a crush on him. After high school, Davia sang at Jeff's wedding to an unnamed woman and the pair remained friends. She later moved to downtown Los Angeles where she became a tenant at The Coterie. She then became a grade school teacher with a side-job as a body-positive Instagram influencer.

For her 24th birthday, she made everyone in The Coterie group wear "Davia t-shirts", and the year before, everyone wore Davia masks.

Davia is outspoken, loud, and strong-willed. She preaches body positivity as someone who used to have anorexia but grew to love her curves and natural figure. She is against bullying but is also hypocritical in that aspect as she degrades and teases many members of The Coterie. Her harsh demeanor, quick-wit, and defense mechanisms all stem from a place of crushing insecurity.

At the same time, she has a thick skin and doesn't let internet trolls bother her, except when the comments come from her mother. She is also very judgemental and disguises her judgemental behavior behind the facade of telling it like it is. She cares deeply about those she views as her friends, which is evident when she protects Bryan's dignity by calling Gael out on not being in a committed relationship with anyone. This later proves to be hypocritical after her relationship with Jeff, a married man, is revealed to The Coterie. While Davia has fluctuating moods and can be incredibly self-center, she has a big heart and cares deeply for everyone around her - including her students.

Davia is of petite height with a curvy body and wavy, shoulder-length blonde hair and green eyes. She wears conservative clothing that primarily shows-off her chest and shoulders.

Davia is first seen in the communal bathroom of The Coterie, getting ready in the mirror. Only her back is seen, and she is topless with only white underwear on. Later, she is seen at the table eating with her fellow residents. Alice introduces Davia as, "body-positive Instagram user" and a teacher. Davia proudly states that she teaches young women that a healthy body doesn't necessarily mean a skinny or perfect body, and states that she struggled with Anorexia when she was younger.

In Capoeira, Davia and Dennis have sex following their proclamation of having feelings for one another. They proceed to plan their first date later that day. That afternoon, Davia is giving Isabella the cold shoulder despite Isabella’s claim that she didn’t do what Mariana accused. Davia confronts Isabella about sleeping with Raj and the fact she doesn’t have the right to refuse to move out. She takes the sandwich she made and leaves the kitchen.

That evening, she prepares for her date with Dennis. Gael enters to ask if she’s seen Dennis. Gael shows Davia the mural he made over Jacob’s mural, though he feels conflicted if he did the right thing as he can’t reach Dennis. She tells him not to worry but when she gets back to her apartment she calls Dennis worriedly. She goes to the grief support group in search of Dennis, though she doesn’t see him. She sits in on the meeting and the lady in charge can tell something is wrong.

At the Coterie, Davia gets a call from Dennis who is in Malibu Canyon to get away from the mural and his negative feelings. She had broken down in the grief counseling as she thinks Dennis realized his conflicting feelings for her and left. The counselor tells Davia that she can’t fix Dennis and must be as kind and empathetic toward herself as she is toward him. In the present, Dennis admits that he isn’t going to hurt himself but also can’t come back to the Coterie until he finds a way through his grief. He can’t be the man for Davia until he can do that. She understands but makes him promise not to disappear and keep in contact with her.

That night, Davia celebrates with the Coterie over Callie having passed the bar. Alice asks her if she's okay, to which she claims she's fine and that Dennis is just out of town.

In Arraignment Day, Davia sulks in the kitchen as she remembers being approached by a fellow teacher about the equity committee meeting that she missed. Davia is hesitant to attend more meetings with her performance review coming up and the committee not being a school-sanctioned event. She wants to wait until she has job security before getting involved. The teacher understands that it’s hard to be an ally when she has something to lose. Davia sulks as Gael comes down. She admits that her principal is observing her class and if he doesn’t approve her for a third-year teacher they won’t pay for her masters. He jokes about her quarter-life crisis but knows she’ll be great. She hasn’t heard from Dennis as she’s trying to give him space. Gael knows Dennis is lucky to have a friend like her. She remembers them having sex.

Davia teaches class but none of her students can answer her question except Andre, who comments as he sits that she’s his favorite teacher. When class is dismissed, the principal tells Davia that she did a great job and will be recommended for the third year. She is later present at Malika's sit-in protest at the courthouse, and again, when Malika is freed from prison and celebrates with the Coterie group.

Davia meets with Jordan who is protesting as one of the diversion students was arrested and put in juvie. Davia remembers a meeting with Andre’s mother who is enraged over the alleged infractions. She panics that the arrested student was Andre, but it’s Javier Cruz. Davia promises Andre’s mother to do what she can to make sure he doesn't get another strike. Davia returns to her desk, but ultimately changes her mind and stands with Jordan in a press conference.

In Whoosh, Pow, Bang, Davia meets with her fellow teachers at The Coterie where they decide to try a better approach to conflict resolution for restorative justice. She doesn’t understand what it means, so fellow teacher Matt explains it’s just a different way of approaching misbehavior. Davia uses the tools when Andre and a fellow student arrive in her classroom after being caught fighting. Matt helps Davia clean up, asking about how she feels about communal living since he lives alone with a cat. As Davia faces the four students, things get out of hand when they begin throwing the ball at each other.

At school, Davia eavesdrops on Matt talking with his students and how easily he relates to them. At the Coterie, Gael’s friends from art school text him about their big breaks making him sulk. Davia arrives ready for wine though he isn’t ready to talk. She opens up about struggling with the restorative justice program which he is familiar with, as he did that in art school. Kelly brings in a huge set of balloons forcing her to lie to Gael and Davia that it’s her birthday since the Byte Club girls are still there. Alice, Davia, and Gael sing happy birthday to Mariana.

Gael shows the teens Jean-Michel Basquiat’s graffiti art and how he put his feelings into his art. Gael admits to relating to the need to put his feelings into art since he wasn’t good at putting his feelings into words. Davia thought instead of a talking circle they would try the art, though a girl is reluctant to draw he assures her she can do it. The teens excitedly look at the materials just as Matt comes to the door, though Davia closes her door and brushes him off.

Davia helps Gael cleanup while they talk about his art, with him feeling as though he’s fallen behind his friends. He didn’t do an internship because he needed to get a job to pay off his student loans. She asks if he can do the internship now with him knowing of someone who is looking. She assures him that everyone is on their timeline so it doesn’t matter how fast they get there, just that they do.

She rounds a corner and runs into Matt and drops her brushes. He makes a corny joke though she apologizes for being rude earlier. Still, his humorous remarks keep things light. She admits to failing her first attempt and bringing Gael in for help, which she thinks is cheating. He assures her it’s not and admits that he doesn’t play Minecraft or any video games, he merely watched influencers on YouTube. Principal Solomon walks by and suggests she check her email which informs her that her contract has been renewed. She is ecstatic alongside Matt, who thinks they should get drinks to celebrate.

Davia takes a photo of herself with champagne and a black dress, texting Dennis that she got her third year but wishes he were there to celebrate. She hesitates as she remembers refusing Matt’s offer for drinks due to her complicated relationship with Dennis. Matt understands that a girl like Davia isn’t single, but thinks whoever she is dating - guy, girl, or person - that they’re lucky. She also remembers Dennis telling her he isn’t coming back to the Coterie. In the present, Davia alters her text to Dennis to just say she got her third year.

This article is a stub. You can help Good Trouble Wiki by expanding it. 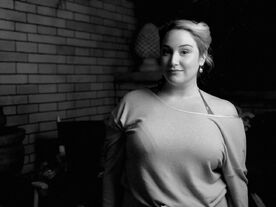 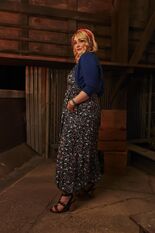 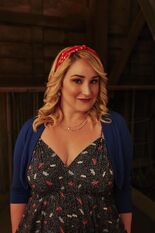 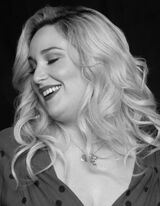 Retrieved from "https://goodtrouble.fandom.com/wiki/Davia_Moss?oldid=98456"
Community content is available under CC-BY-SA unless otherwise noted.