Good Trouble Wiki
Register
Don't have an account?
Sign In
Advertisement
in: Season One Episodes, Episodes, Season 1,
and 3 more

Millicent Shelton
Clean is the eighth episode of Season 1 in The Fosters. It aired on ABC Family on July 22, 2013.

A visit from Lena's beautiful and sophisticated ex-girlfriend reveals a secret yearning Lena has hidden from Stef for the past ten years.

Meanwhile, Brandon struggles to please his demanding new piano teacher and rebuffs an offer from Talya to reconnect. When an embarrassing video of Talya circulates around the school, Callie lends her support and urges Brandon cut her some slack. Mike's drinking and Stef's mounting concern do not go unnoticed at the precinct. Mariana and Jesus go to tell Ana to leave Mariana alone.

The encounter with his birth mom and her desperate situation drive Jesus to take matters into his own hands, a move that could have dire consequences for the whole family.

The family was all sitting down for a family dinner. Stef told Callie that she spoke to Bill about Sarah and Liam, but told her not worry as they sat down to eat. Before the family had dessert the phone rang. Brandon picked up the phone and it was for Mariana. Brandon handed her the phone, and Mariana realized it was her biological mother. Mariana left the room, rebuked her mother for calling the house phone and told her she had no more money for her. Brandon had his piano lesson with his new instructor. His teacher spoke to him about taking risks and playing the

with passion. His teacher encouraged him to find some emotion to put behind the notes.

At school Callie tried to make an apology to Wyatt, but he was disinterested in what she had to say; he stormed off from her.

Tayla approached Brandon at an outside lunch table and tried to give him a gift because it would have been their anniversary. He politely refused her gift because he didn't what her to get the wrong impression.

The episode then cut to Stef and Mike on duty and they witnessed a driver blow through a red light. They stopped the driver who exited the vehicle, but when Mike tried to cuff him he was struck with an elbow. Stef chased down the suspect on foot and apprehended him. They scolded Mike for not being more vigilant and focused.

Later that night Stef approached Brandon while he was practicing and they talked about Mike. Brandon told his mother that Mike was drinking again.

The next day at work, Stef and Mike were probed about the incident further by their captain. The captain asked Mike to leave and then asked Stef if he was drinking again.

Back at the school, Tayla was looking at Brandon and the teacher left. When the teacher left, two students began laughing about something on a phone. Tayla asked what was so funny, and one student said he would show her. He hooked his phone into the classroom projector. It was a video of Tayla at Wyatt's party drunk and silly. Tayla ran out embarrassed, Brandon removed the video and Callie ran after Tayla to comfort her.

Stef and Lena were out to dinner with one of Lena's old friend. Stef was in uniform and took off her uniform top to

drink after having reprimanded Mike earlier that day for drinking as a police officer. At dinner, Lena was uncomfortable and didn't seem to happy about aspects of the conversations.

Back at the house, Callie tried to convince Brandon to cut Tayla some slack and be more understanding.

The episode returned to the dinner date, and Lena seemed upset that Stef and her friend Gretchen (who was an ex-lover of Lena) hit it off so well. Stef even invited Lena's friend to have dinner with the next night and meet the children.

Then back at home, Jesus tried to convince Mariana to drop off their mother at a women's shelter. Mariana told Jesus that they could never go back to her home and that she would just ask for money and take advantage of their emotions.

The next day, Jesus was playing volleyball when Lexi approached him and yelled at him for avoiding her. Jesus and Lexi were fighting, Lexi was upset that she isn't a legal citizen and Jesus tried to comfort her.

Inside the school, Callie again tried to approach Wyatt in the hall. Callie tried to get Wyatt to see a movie with her but he turned her down saying he had a thing. Callie quoted him back "Well, when your thing gets boring, you know were to find me" with a smirk.

Afterwards, Jesus went to Ana's house and asked her boyfriend if she was home.

At the house, Gretchen was recalling time with Lena to Mariana. Mariana let it slip that her mothers weren't married

and a discussion about gay marriage arose and it upset Lena. During the conversation Lexi texted Mariana asking where Jesus was, and she then called Jesus who didn't answer. During the dinner, Gretchen let it slip that Lena was obsessed with marriage and it became a issue between Stef and Lena. Stef began probing Lena about why she didn't express her interest in marriage to her. Then Lena scolded Gretchen who decided to leave as a result. After she left, Stef asked Lena why she didn't tell her about how she felt. Mariana interrupted their fight to tell them about Ana and how she though Jesus was there most likely. Stef grabbed her gun and decided to go find Jesus. Callie waited outside the movie theater but Wyatt didn't show. She went inside to watch the movie alone, when Wyatt showed up. The scene then cut to Tayla and Brandon leaving a concert, which was the gift she was going to give him for their anniversary. They were talking about his

music as they left the concert, but Brandon expressed his uncertainty with continuing his piano lessons. They went to grab a coffee after the show. Stef pulled up to Ana's house, and Mike met her there, having been called by Lena. They saw drugs as they entered, but Jesus and Ana were missing. As the credits rolled in, several shots were fired and lights flashed. 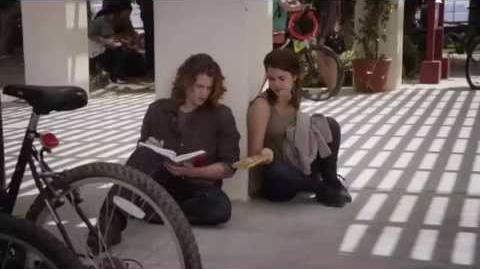