Good Trouble Wiki
Register
Don't have an account?
Sign In
Advertisement
in: Characters in The Fosters, Characters, Male Characters,
and 6 more

Where the Heart Is
Klompendansen

Spencer List
Carter Hunter is the younger brother of Eliza and Jamie and the youngest son of Jim and Diane Hunter. He is portrayed by Spencer List.

Carter is the youngest child of Jim and Diane Hunter, and the youngest brother of both Eliza and Jamie. He grew up in a very strict and conservative household, as his parents held traditional values and ideas about the world. Because of this, Carter never felt safe coming out as gay or bisexual. Instead, he repressed his feelings and dated girls, even though he may not have been physically attracted to them.

Carter is a young adult with short, wavy, dark brown hair and brown eyes. He once had an asymmetrical haircut with one side buzzed and the other reaching to his jawline. He wore his hair shaggy over his eyes and casual clothing, though his upper-class status allows him to wear expensive clothing even if it appears relaxed.

In Meet the Fosters, Carter is present with his family when the Hunter's are meeting the Adams Foster family for the first time. He catches Jude spiking a soda with alcohol, and asks for one of the drinks so they sit outside to talk. They talk about college, with Carter attending Princeton but still feeling inadequate compared to "golden boy" Jamie. He's studying the classics, such as Latin, as it's a good foundation for law school. He asks about Jude's experience at UCLA and he admits to being unsure of his major. They share flirtatious moments though Carter claims he has a girlfriend who is a psych major. When talking to Callie, Jude asks if she gets a "gay vibe" from Carter.

In Turks & Caicos, Carter travels with his family and the Adams Fosters for Brandon and Eliza's wedding. He spends time in the ocean with Jude, the pair being very physical in the water while Jim watches. That evening during Stef and Lena's PowerPoint presentation, Jude and Carter don't pay any attention as they are busy talking and laughing with one another. At the bar later that night, the Adams Fosters men and the Hunter men hold an impromptu bachelor party for Brandon. Jamie plays table hockey against Jesus but repeatedly loses, much to Carter's amusement. He absentmindedly scouts for girls which Jude finds confusing, as he has a girlfriend. Carter than reveals they aren't exclusive.

He gets drunk and handsy with a woman at the bar, so Jude intervenes after she leaves to escort Carter back to his hotel room. Once there and in bed, Carter kisses Jude who rejects the advances as Carter is drunk. He becomes emotional and cries into Jude's chest, admitting that he's messed up which Jude knows but reassures him that everything is okay. Carter asks him to stay until he falls asleep, and Jude helps him into bed then sits on the opposite bed.

In Where the Heart Is, Carter is present the next afternoon when Eliza gets married, serving as a groomsman for Brandon. He escorts Mariana down the aisle with Jude on her other arm, and they take their place in the groomsmen line. After the ceremony, Jude asks Carter how he is doing. Carter nervously tells Jude that his father saw Jude leave the room last night and freaked out, since Jim knows Jude is gay and doesn't want his son to be. Carter emotionally admits that his family isn't accepting of his life so he can't be whatever he wants. He apologizes to Jude than walks away. Callie asks Jude if he hooked up with Carter, but Jude merely claims that he didn't, choosing not to out Carter.

In Nochebuena, Carter gathers with the rest of his family for Christmas in LA, which he shares with the Adams Foster family. In a speech, Diane teasingly remarks how all of her children are involved with the Adams Fosters kids except Carter, but quickly tells Mariana "hands off". Carter shares a look with Jude from across the room. As the party progresses, Jude meets up with Carter in the bathroom to make out, though they are almost caught by Lena who knocks on the door. Jude nervously shouts that he's in there causing her to walk away, and the boys to start laughing. She hears them laughing but doesn't bring it up again. The pair share flirtatious looks throughout the evening.

In A Very Coterie Christmas, Jude and Carter attends the Christmas part at The Coterie, standing off to themselves happily. They make out in the elevator and Carter stops it prematurely, telling Jude that he's planning to come out to his parents the next day. Jude isn't sure coming out on Christmas is a great idea, though Carter admits that his parents can't kick him out on Christmas. Jude can't believe that his parents would kick him out, though Carter knows that his mom will be disappointed and cry, making his dad feel inferior, so he hopes to tell his father first. He just wants to come out to his family and for everyone can know about their relationship. Lena tells Stef that she thinks something is going on between Jude and Carter. When Jim and Diane arrive unexpectedly, Carter pulls his father aside to tell him but isn't able too. Jude assures Carter that he doesn't have to come out for him, but Carter feels like his siblings are perfect and straight, with Jude assuring Carter that just because his siblings are straight doesn't mean they're any better than him. He promises to stand up for Carter if his parents aren't able to see him for the amazing guy he is. Jude accidentally says I love you which Carter teases him about and they kiss. At the countdown to Christmas, Jude and Carter stand together and interlock pinkies.

In Klompendansen, Carter tells Jude about his big decision, clarifying he isn’t to come out to his parents, but considering a transfer to UCLA and already got accepted. From behind Carter, Jude spots Connor Stevens dressed as a waiter. He remembers their times together when they were younger and their relationship. He is surprised to see Connor who explains he is working for the party and going to UC Irvine on a baseball scholarship, and the boys take a moment to catch-up before he has to go back to work. Once Connor walks off, Carter asks how Jude knows Connor to which Jude lies that he’s just a friend from middle school.

Jamie arrives late and asks Carter where everyone is, learning that Diane took everyone on the tour. Carter warns him that Callie is here. The families sit down for dinner with Jude and Carter seated next to one another in their assigned seats. The waiters enter and Jude smiles at Connor, prompting Carter to tell Jim that he’s transferring to UCLA, an idea that Jim promptly shuts down. He doesn’t want Carter to transfer from an ivy league to a state school. Diane wants to table the discussion but Jim presses the issue. Carter explains UCLA has a film program. Diane tries to change the subject back to Brandon and Eliza’s going away party, adding that it’s also Stef’s going away party. Diane snaps at Jim when he refuses to pay for Carter’s tuition to study film.

As dinner progresses, Jim asks how Lena feels about the housing bill and the children begin to text one another; Carter confronts Jude if he is okay with him going to UCLA, to which Jude just wants to be sure Carter isn’t coming for him.

When dinner is over, Carter and Jude stand alone on the balcony. Carter assures Jude he isn’t just transferring to UCLA for him and they can still see other people if that’s what is freaking him out. Jude claims he isn’t freaking out just as Connor emerges, and Carter leaves to give them privacy. Connor asks if Jude is seeing Carter, to which Jude explains that he is kind of, though Carter isn’t out to his parents. Connor and Jude share a tight hug that ends in a kiss, which is witnessed by an emotional Carter.

Jim pours a drink while talking to Diane, asking if she thinks there is a connection between UCLA and Jude. He asks if she had gay friends in college which surprises her. He admits to wondering if Carter is gay. Diane doesn’t think it would matter if he were, but Jim thinks it would matter a lot.

Jim finds a depressed Carter sitting on a bed and joins his son. Jim tells Carter things are fine even though he and Diane are going through a rough patch. He’s been working a lot and she was looking forward to the trip. Carter thinks Jim should still take her if it makes her happy, reminding his dad that it doesn’t always have to be his way. Jim wants to talk about UCLA, but Carter claims he’s changed his mind, leading Jim to ask why. Carter becomes emotional and Jim worriedly asks what’s wrong. Carter emotionally admits that Jude doesn’t want him to transfer, but Jim wonders why that matters. He then asks carefully if Jude is his boyfriend, and Carter admits that he doesn’t know anymore as he thinks Jude is breaking up with him. He looks at his father emotionally and Jim apologizes to Carter, bringing him in for a hug. Carter tells his father he loves him as sobs into Jim’s chest.

Jude finds Carter who reveals he came out to his dad. Jude jokes about hiding but Carter asks if they’re still together, as he saw him kiss Connor. Jude tells Carter that was just the goodbye kiss they never had. He doesn't want to hook up with anyone else, he wants to be exclusive with Carter if he wants that. Carter admits he does want that but asks why Jude doesn’t want him to transfer to UCLA. Jude explains his first year of college was terrible until he finally found himself, and he wants to have his own college experience and thinks they both should. Carter understands that and states that NYU has a great film department that he might apply to. He kisses Jude happily. As everyone says goodbye, Jude and Carter enter, openly holding hands with each other. 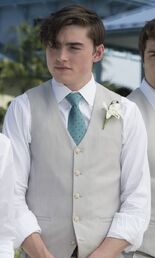 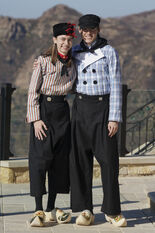 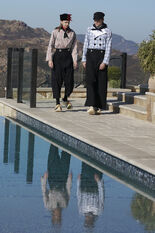