"Instructor: This is capoeira. It was brought to Brazil by enslaved people from West Africa. It's not only about self-defense, but about culture identity. There are two main objectives in capoeira, one is ginga, the ability to stay in constant movement so that you can make yourself into a very difficult target. The next is the ability to fake out your opponent, opening them up to the attack or the counter-attack.
Dyonte: I wanted to share this with you before court today because this practice helps me feel strong and resilient and prepared for any surprise attack. Knowing that I can defend myself spiritually and physically against oppression or harm.
Malika: It's okay, I got this."
—Capoeira

Capoeira is the first episode and season premiere of Season 3 of Good Trouble. The episode aired on February 17, 2021.

With Jerod’s case on the line, Callie takes a job with a high profile defense lawyer. After sleeping with Evan, Mariana has to make a decision regarding her relationship with Raj. Meanwhile, Malika’s future is on the line with her impending trial.

Mariana stands in the elevator as she remembers her hookup with Evan. Malika and a man spar. Dennis and Davia have sex. Gael and Callie pour wine with her apologizing for not telling him that Jamie bought his art piece. He accepts her apology. Gael apologizes for the things he said, as being with her wasn’t a mistake. He asks her if things between her and Jamie are over. She explains things are complicated. Gael has sex with someone in his loft.

Dennis and Davia plan to have their fast date. Alice sneaks into Mariana’s loft to find specific clothing for Mariana, who woke her up to ask for help. Mariana doesn’t want to talk to Isabella until she speaks with Raj. Alice knocks down a shoebox but Isabella seemingly sleeps through it, but as Alice goes to leave Isabella stands behind her. Alice lies that she’s borrowing clothes from Mariana but Isabella cries as she would never do anything to hurt Mariana.

Malika and Isaac talk about her hearing tomorrow, but she isn’t worried since her BLM lawyer told her it was routine. Isaac is skeptical about the lawyer’s claim that the DA would back down if Malika didn’t take the deal, with her reminding him that was her decision. Malika insists that the reason she is in trouble is because of her actions, though he’s still worried. She refuses to let him cancel his business trip. At Speckulate, Mariana is conflicted over Raj and Evan, remembering Alice telling her that Isabella’s confession might not be about Raj. Isabella had confessed to Alice that she slept with a past boyfriend but insists she wouldn’t do it again. Alice reminds Mariana to ask herself if Raj would cheat on her. Mariana receives two texts from Raj and Evan asking to talk. The moments after her fling with Evan were awkward. Her current meeting at work isn’t going well either.

At Legal Aid, Callie meets Kathleen Gale, the new tenant who has issues with the drab interior. Callie learns that they are moving into the new Legal Aid building downtown for a budget issue. Kathleen is a defense attorney who split from her firm and is now opening a small non-profit defense job at the former Legal Aid building, along with a few of her junior associates. Callie tells Marcus that she thinks she did well on her bar exam, with Marcus knowing that Callie sent the anonymous tip to the tenants who are planning to fight to stay in their homes. He wants her back on the case as co-council as long as there isn’t a conflict of interest with Jamie, to which Callie promises to get back to him on that. She checks messages from Jamie but he hasn’t responded. She gets a call from the ADA office as someone else is pressing charges for the break-in at the apartment building and wants her as a witness.

She confronts Jamie outside the building. He is pressing charges but not as revenge for her actions, but due to Jared returning and causing problems. Callie doesn’t think he’ll be safer in jail, but Jamie disagrees and leaves for work. Malika and Dyonte walk down the street as they chat. They decide to play hopscotch, and they are both pretty good, though Dyonte lands poorly from a roll. They tease one another playfully. At the Coterie, Davia is giving Isabella the cold shoulder despite Isabella’s claim that she didn’t do what Mariana accused. Davia confronts Isabella about sleeping with Raj and the fact she doesn’t have the right to refuse to move out. At Speckulate, Mariana hides in the bathroom to avoid Raj who claims he’s no longer confused about Isabella and loves her. She texts Raj back that she loves him and wants to be with him too. She goes to the team office where she sees a message from Isabella confronting Raj about telling Mariana they slept together. She hurries into the Coterie only to find that Isabella has moved out.

Malika and Dyonte finish picking up the posters for the “#FreeMalika” movement. She is overwhelmed and begins to panic as she’s scared. He reminds her that they have a team and are powerful enough to fight for her, as she isn’t alone and has to trust them. Malika knows they can’t promise she’ll stay out of jail. She crouches to the ground emotionally but Dyonte assures her they have her back. Callie visits Jared in prison where she learns about the aggressive tactics the guards have been using. He remembers her as the nice lady who buys her coffee. They refused to give him medication so he refused to leave his cell, so the guards sprayed him in the face and began hitting him. Jared tried to get the guards off him which led the guards to claim Jared hit him first. Callie takes photos of Jared’s bruises though she can’t be his lawyer as she hasn’t passed the bar yet. He apologizes for breaking into her apartment. Davia prepares for her date with Dennis. Gael enters to ask if she’s seen Dennis. Gael shows Davia the mural he made over Jacob’s mural, though he feels conflicted if he did the right thing as he can’t reach Dennis. She tells him not to worry but when she gets back to her apartment she calls Dennis worriedly.

Callie brings her case to Kathleen Gale, who asks if she wants to smoke weed or drink with her but Callie refuses. Kathleen warns her that not winding down at the end of the day will catch up with her. The case is a loser as the jury will believe the guards over an inmate, and excessive force would be denied. Callie continues to convince Kathleen to help Jared, though she’s apprehensive. Kathleen is impressed by her idealism yet unwilling to fight, so she agrees to help but on one condition. Davia goes to the grief support group in search of Dennis, though she doesn’t see him. She sits in on the meeting and the lady in charge can tell something is wrong. At the Coterie, Mariana tells Callie that Isabella moved out, though Raj claims he didn’t sleep with her. She tells Callie about sleeping with Evan with Callie understanding her motives, but Mariana asks her for advice. Callie suggests working it out unless she doesn’t want to, with Mariana admitting she’s conflicted over things. She asks about Jamie to which Callie admits emotionally that things might be over. She remembers earlier that afternoon that she stopped Jamie from leaving, but he is hurt as his firm lost the OnWay account so he might lose his job. His employers will piece together that Callie is the reason the activists were tipped off, placing the blame on Jamie for her having access to the documents. He tells her that she ruined him whether she meant to or not. Meanwhile, Malika and Isaac facetime with her lying that she’s fine. She teases that they should get a bigger bed since he’s so tall, but he proposes the idea of getting a bigger place. She doesn’t want to talk about that over the phone so they exchange I love yous and end their call.

Mariana meets Raj on the roof with him swearing he didn’t sleep with Isabella, which she knows. She thinks their feelings for other people are telling them they shouldn’t be together. She also tells Evan their relationship is complicated with him being her boss, though she thinks things could still work between them. They decide to be in a secret relationship. At the Coterie, Davia gets a call from Dennis who is in Malibu Canyon to get away from the mural and his negative feelings. She had broken down in the grief counseling as she thinks Dennis realized his conflicting feelings for her and left. The counselor tells Davia that she can’t fix Dennis and must be as kind and empathetic toward herself as she is toward him. In the present, Dennis admits that he isn’t going to hurt himself but also can’t come back to the Coterie until he finds a way through his grief. He can’t be the man for Davia until he can do that. She understands but makes him promise not to disappear and keep in contact with her. Malika’s lawyer claims that Judge Wilson refuses to press charges which invalidates the prosecution’s case, and wants the criminal complaint dismissed. The prosecutor wants to push forward despite this as the law is clear on the matter. She also asks that Malika’s bail be revoked due to her association with BLM deeming her a flight risk. Malika would be taken into custody immediately.

Callie arrives at the Coterie and Mariana gives her a letter that came for her, promising that she didn’t open it. Callie gives it back and asks her to open it. The letter tells Callie that she passed the bar and the Coterie residents come out of their hiding spots to celebrate. Callie reveals that Kathleen asked her to quit Legal Aid and work for her, which Callie has accepted. The group toasts with Gael and Callie exchanging a look that Mariana asks about, though Callie claims that nothing happened. Alice asks if Davia is okay and she lies that she is, telling her that Dennis is just out of town. Mariana toasts to Callie moving in as well, with Gael asking about Isabella. In a flashback, Isabella visits Gael as she’s lonely and they’re both single. He accepts her wine bottle and they have sex. Gael asks Mariana why she moved out, to which Mariana lies that Isabella just left and didn’t leave a note. Alice proposes having a family dinner which makes everyone realize that Malika isn’t there. In the court, the judge refuses to revoke bail but decides to raise it to $250,000 with her being remanded into custody until it can be paid. The bailiff arrests Malika, who remembers her sparring session with Dyonte where he taught her capoeira, a type of self-defense that makes her a difficult opponent and a difficult opponent. She remembers that she can handle things thanks to his speech, and tells him in the court that she’s got this. 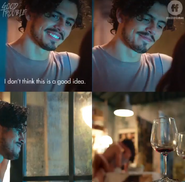 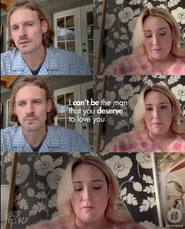 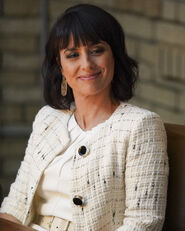 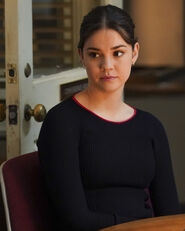 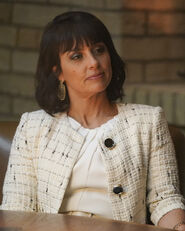 Good Trouble Season 3 Premiere - Callie and Jamie Are Over - Freeform 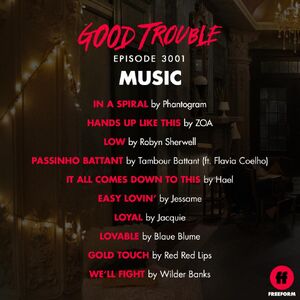