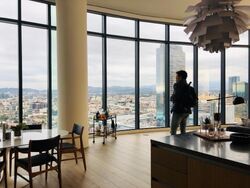 Callie and Jamie's Apartment is an upper-class apartment-loft located in downtown Los Angeles. It is currently being leased by Jamie Hunter and Callie Adams Foster.

In Nochebuena, Jamie's family visits and they take a group family picture alongside the Adams Fosters. The group then has dinner and drinks together.

In In Good Conscience, Callie and Jamie make a deal regarding the apartment. They agree that their financial strain should be equal. They both end up using 30% of their income on rent. Callie also requests that her name on the lease so she's protected in case Jamie ever decided to kick her out without warning. While he assured her he would never do that, he agreed to have her name on the lease.

In Truths and Dares, Every morning Callie gives a homeless man, Jared, who lives outside the apartment building money and, occasionally, coffee. When she leaves the door propped open with groceries he enters the apartment in the midst of a psychotic break. He is convinced she stole something from him and is hiding it. He believes he is in a hospital and that Callie is a nurse. Jamie calls her and she answers it so he can hear the arguing between her and Jared. She agrees to help him and plays along with his delusion in the hopes of satisfying him long enough for help to arrive. While entertaining the delusion she told him he could sleep on the couch until his "bed" was ready for him. She promised to keep him safe and assured him he could trust her.

When the police arrived they handled Jared with force despite Callie's protests that he isn't violent and is having an episode. Jamie rushed back to the apartment and found Callie sitting down with police officers. She explained to the police and Jamie that she wasn't sure how Jared was able to enter the building or her floor, especially since the security is so high. She then told the officers she didn't want to press charges and they left.