Callie and Gael also referred to as Gallie/Cael is the romantic pairing between Callie Adams Foster and Gael Martinez.

Callie moved into the apartment complex that Gael was residing in, and they instantly had a connection. They met on her first night at the apartment and bonded over their mutual love for art, political activism, and had a basic connection. Gael showed her his art and they had sex in his loft. The next morning, Gael was getting ready to go on a bike ride when Callie and Mariana interrupt him. Mariana introduced the pair, and both of them acted as if they hadn't met. Gael then left, and Mariana quickly restated her interest in Gael to Callie before leaving for work. When Callie went back to Gael that night to break things off with them, they ended up having sex again, which Callie regretted because she had lied to Mariana.

That night at the roof of the pool, Callie told Mariana the truth and they witnessed Gael making out and then beginning to have sex with another male. Both girls were shocked and Callie downed her wine as Mariana quickly stated that she forgave her and could have Gael. Callie avoided him until she talked with Jude and faced her personal reservations about dating a bisexual man, which Gael instantly thought would have been an issue due to his past. Callie, much to his surprise, stated that it wasn't an issue, and they restarted their casual non-exclusive relationship. They later broke up after realizing that neither one of them were able to focus on their professional careers while being distracted with one another.

"So when we... I didn't know you worked with my sister or I never would have... So I think it’s better if we don't – again and it's definitely better if Mariana doesn't find out we did. Because I never want a guy to come between us."
—Callie to Gael

"Callie: I'm a terrible person.
Gael: The worst."
—Gallie after they have sex again

"Living here with you is too. It hurt seeing you with Bryan."
—Callie

"Gael: Yeah, and I guess it hurt me when you said you didn't want to introduce me as anything to your moms. I know we're not in a committed thing, but we don't have to be exclusive to admit that this thing isn't just casual. Not for me.
Callie: It isn't for me either."
—Admitting their relationship isn't "casual" 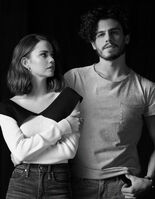