"Jesus: Just tell me whose ass I'm kicking first.
Marina: You're not kicking anyone's ass, although, I would love to watch."
—Mariana and Jesus

Byte Club[1] is the eighth episode of Season 1 of Good Trouble.

Mariana forms a women-in-tech “fight club” with other women in her office to deal with sexism in their workplace. Meanwhile, despite bonding over past traumas, Callie and Rebecca don't see eye-to-eye on how to address a potential workplace harassment situation for a colleague. Guest-starring Noah Centineo.[2] 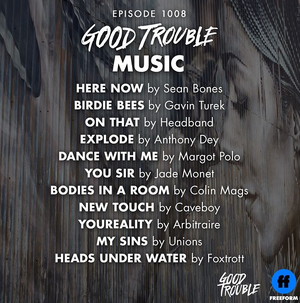 Retrieved from "https://goodtrouble.fandom.com/wiki/Byte_Club?oldid=95162"
Community content is available under CC-BY-SA unless otherwise noted.