Ken Kirby
Benjamin is a former recurring and guest character in the Freeform series, Good Trouble. He is portrayed by Ken Kirby.

Benjamin is a conservative clerk who clerks for Judge Curtis Wilson at his court of law, previously alongside Callie Adams Foster and Rebecca.

Benjamin was born and raised in Denver. He attended Harvard school of law for college and graduated with honors. However, he paid for the schooling on his own which resulted in a lot of debt. He eventually earned a job clerking for the Federal Judge Curtis Wilson. He worked with Rebecca before Callie's arrival at the clerk's office, suggesting that he is older than both Rebecca and Callie.

Rigid and business-oriented, Ben strives for perfection. He is intelligent, whip-smart, and sarcastic nearly to a fault. He has an innate desire to impress Judge Wilson, even if it means pitting Rebecca and Callie against each other. When not competing with them, he showed to have a caring side and he is open to giving Callie advice despite their rocky pasts.

Benjamin is a young man in his mid-twenties with short brown hair, brown eyes, and a slim build. He wears professional and classy clothing. He wore a black watch. 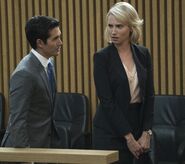