That's Me in the Spotlight

Anglica Sofer is a minor recurring character in the Freeform series, Good Trouble.

Angelica is a pretty woman in her mid-to-late twenties with high cheekbones, an oblong face, and big brown eyes. She has dark brown hair that reaches her shoulders.

In Opening Statements, Malika is working late at Douro when she’s given a coffee by Angelica - a new waiter at the bar. Malika explains her activist work which is why she’s so tired. Angelica gets it as she also works two jobs. She’s glad to know she works with cool people. Malika calls herself lame but Angelica doubts that’s true. Malika then answers a call from Dyonte who just wanted to say hi before her shift. He’s working on the essay grant too. She offers to look at it after her shift so he agrees to send it over later.

Angelica tells Malika that the flower lady is back. Malika doesn’t have the heart to throw her out as she’s trying to make a living. They agree that it’s annoying for the customers, but they both find it interesting to watch customers struggle with buying a rose and dinner. Angelica asks about the grant but Malika admits she didn’t get it. She leaves to wait tables just as Dyonte walks in. Later, Angelica interrupts to give her a rose to cheer her up and they exchange playful banter. Malika thanks her for the rose as Dyonte looks at her intrigued.

In Anticipation, Malika talks with Tanya as Angelica delivers food and then leaves. Malika asks Tanya if she gets a queer vibe from Angelica. Tanya isn’t sure and asks Malika the same question. Malika isn’t sure either as Angelica asked her to go on a hike but she isn’t sure if it’s a date. Tanya asks if she’s open to that. Malika’s never dated a woman but wouldn’t be closed to it if the chemistry was there. She isn’t sure if it is there or not.

The next day, Malika and Angelica go hiking while Malika struggles as she isn’t wearing hiking boots. The girls exchange fun banter. Malika checks her phone but Angelica warns that reception is pretty spotty which is why she thought it would be good for her. She tells her to enjoy the beauty of nature. Malika finds it difficult as there’s always a crisis. Angelica convinces Malika to turn her phone off for a couple of hours and they cheer happily. Malika asks Angelica if she’s seeing anyone but Angelica is single. She asks Malika the same and learns of the polyamorous relationship between Malika and Dyonte. She explains Tanya’s primary as it’s complicated. Angelica is curious about her because she finds Malika intriguing. Malika thinks the feeling is mutual. Malika thanks Angelica for asking her to hike and Angelica’s glad she came. They smile and Malika asks what she’s doing later and invites her to The Coterie for food or tea. Angelica happily accepts.

Back at The Coterie, Kelly plays a game with Kiara and her siblings as the police arrested their mother. Kelly is happy that she is an appropriate babysitter. Malika apologizes as her phone was off but assures Kiara she came to the right place. She assures them that she’ll get their mom out of jail and they can stay with her for the night. Angelica apologizes for making her turn off her phone and asks if she can help. Malika refuses her help as she’ll call Dyonte since the kids know him already.

In "Turn and Face the Strange", Angelica attends Dennis's food truck opening and kisses Malika hello. Malika introduces her to Dyonte Davis, her polyamorous partner, with Angelica taking the meeting with a smile. 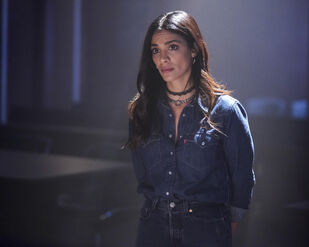