The Adams Foster House was a home in which Lena and Stef Adams Foster owned. The couple, with the help of Lena's parents, purchased the home after they partnered.

The couple originally lived there with Stef's son, Brandon, before they became foster parents. They then adopted the twins, Mariana and Jesus. They later opened their house once more to the siblings Callie and Jude, whom the couple ultimately decided to adopt.

After Stef and Lena became partners and mothers to Brandon, they fostered the twins, Mariana and Jesus. They outgrew their former place and Lena fell in love with the house as soon as she saw it, despite it being well over their price range. However, Lena talked to her parents and managed to get her inheritance early so the women could make a down payment. After some mild begging, Stef agreed to buy the house and they moved in. Each of their children was given their own room, and soon after, Mariana and Jesus were adopted.

Several years later, Lena brought Callie into the house, followed by her younger brother, Jude. After all of the kids moved out and went away to college, Lena considered running for a position on the student board. However, they would have to move to a different district to run, something that was originally a deal-breaker for Lena. After the support of her family, Lena decided to run after all, and they sold their house.

Callie's side of her room 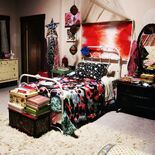 Mariana's side of her room

Jude's side of his room